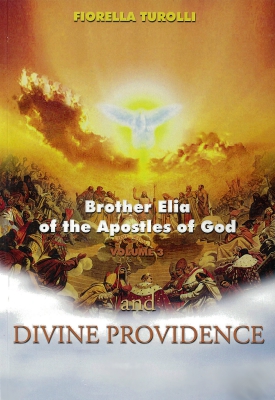 For those who have not yet read the first two volumes, let us recall primarily the quest, the mission and the vocation of Brother Elia that remained problematic and painstaking until the day he found, in the diocese of Terni, a sympathetic bishop who gave him the opportunity to respond favourably to his vocation as the founder of the Congregation of the Apostles of God.

Elia Cataldo, Brother Elia in religion, was born on February 20th, 1962, the eighth child of a family of peasants in the Apulia region of southern Italy. At the age of seven, he saw angels for the first time, and at twelve years old, he walked to school in conversation with the Virgin Mary by his side. Guided by Lechitiel, his powerful guardian angel, the very same who served Jesus during His Agony, Brother Elia was granted many charismatic gifts, notably the stigmata of Jesus, ecstasies, reading of consciences, out-of-body experiences, bi-location, healings and conversions, exorcism, visions of Jesus, the Virgin Mary, Padre Pio, his mentor, and many other saints, like Mary Magdalene.

In this day and age of such rampant materialism, relativism and agnosticism which stifle the faith in God and religion, these astonishing signs of Heaven are particularly useful in this asphyxiation in order to restore man's sense of God and spirituality. 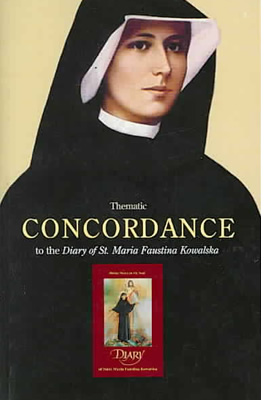 Thematic Concordance to the Diary of St. Maria Faustina Kowalska

Anyone familiar with the Diary knows that it contains Saint Faustina's daily record of experiences, thoughts and prayers. Unfortunately, these are presented in no logical or chronological order. Hence the development of this book. The study guide is an essential resource for every promoter of the Divine Mercy, including priests and religious who want to read and study the diary. 160 pages. 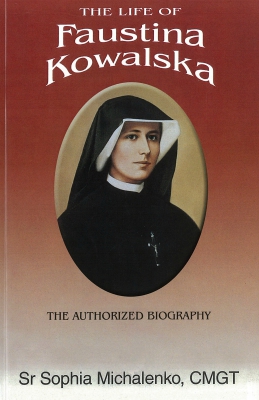 (Formerly titled Mercy My Mission). One of the most popular books on Sister Faustina. The author carefully selects passages from the Diary which most clearly reveal the life and mission of Sr. Faustina. 272 pages. 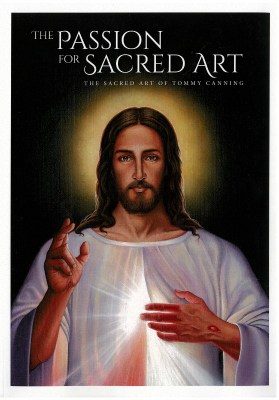 This evocative collection of paintings and illustrations reflect the imagination and spiritual nature of Tommy Canning’s artistic world - from beautiful images of the Mother of God to stunning and dramatic portraits of Christ.

The Passion for Sacred Art charts Tommy’s journey from a promising young Scottish comic book artist to a world-renowned painter of Divine Mercy. His hope is that his art serves as a window into heaven, to help souls see a glimpse beyond the Veil.

It has a high-gloss cover and is ideal to put onto a coffee table or to give as a gift to a loved one. A4-size, 140 pages.

A book every Catholic will treasure! 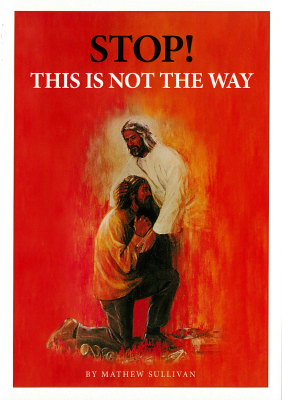 Stop! This is not the Way!

An inspiring story of one man's journey of self-discovery and transformation. Mathew's story highlights the detrimental effects of trauma when left untreated. He provides a greater understanding of the path of a drug user, and why drugs are used in the first place. After a near-death experience we are taken on a miraculous journey within as he searches to change all of the things in his life that no longer service him.

What Mathew discovers in the process, and how he changes, is insightful and truly inspirational. In the end when Mathew finds true healing and peace, he finds that what he was searching for in drugs can really only be found through the love and peace of God. A fantastic book with a marvellous happy ending. It surely is a "cracker of a ride" the reader is taken on... 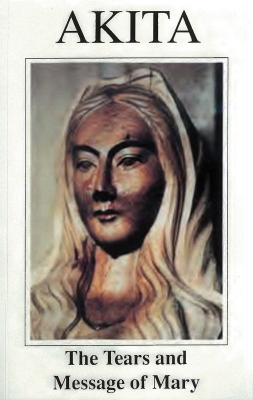 Akita - The Tears and Messages of Our Lady

News of tears flowing from a statue of Our Lady in a convent in Akita, Japan, spread through the entire nation following a series of articles in the publication Catholic Graph. Over a considerable time newspapers, magazines, radio and television have covered these events. Church authorities considered it prudent to maintain quiet.

On Easter Sunday, 1984, 22nd of April, the Most Rev. John Ito, the Bishop directly responsible, issued a pastoral letter declaring "the events of Akita" to be supernatural... Since that time pilgrims have come in ever greater numbers from all parts of Japan and from many other nations. - From the preface.

Most Sacred Heart of Jesus, truly present in the Holy Eucharist, I consecrate my body and soul to be entirely one with Your Heart, being sacrificed at every instant, on the altars of the world, giving praise to the Father and pleading for the coming of His Kingdom... 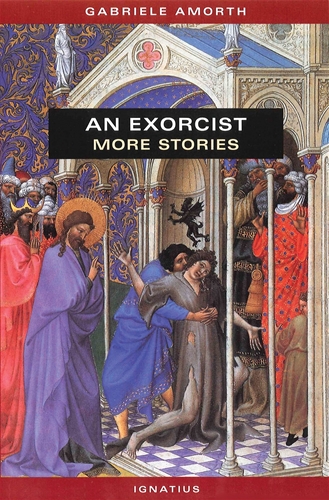 Following up his international best-selling book, An Exorcist Tells His Story, Fr. Gabriele Amorth, the renowned chief exorcist of Rome, expands on some of the key topics of his previous book, covering important details about demonic or occult issues. He uses concrete examples from his own experiences and those of other exorcists to illustrate and substantiate his points.

Since satanic sects, occultism, seances, fortune-tellers and astrologers are so widespread today, Father Amorth asks the question why is it so difficult today to find an exorcist, or a priest who is an expert in this field? The example and the teaching of Christ is very clear, as is the tradition of the Church. But today's Catholics are often misinformed.

Exorcisms are reserved for appointed priests, while all believers can make prayers of liberation. What is the difference? What norms must be followed? What problems are still open and unresolved in this field?

The new book by Father Amorth answers these and many other questions, supporting his discourse with a rich exposition of recent facts. A valuable, practical and instructive manual for priests and lay people, on how to help many who are suffering. 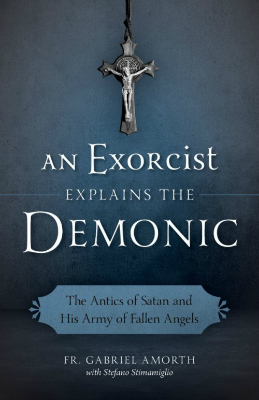 An Exorcist Explains the Demonic

From Fr. Gabriel Amorth, the renowned exorcist in Rome, comes this powerful, eye-opening book on the deadly antics of Satan and his fallen angels, as well as spiritual remedies for each.

These pages provide a basic orientation in the dark phenomenology, succinctly explaining Catholic doctrine on the fallen angels and the innumerable manifestations. Among the many questions Fr. Amorth answers in this book are:

Where does the Evil One dwell in the human body? How does the Devil appear and what does he look like? What are the powers that comes from Satan? Do the sins of ancestors influence our life? How are spiritual evils contracted? What is the state of souls in purgatory? What is the role of sacramentals in fighting off temptation? When should exorcisms and prayers of healing be performed? What happens during an exorcism? What you should do when a family is being attacked by a demon? 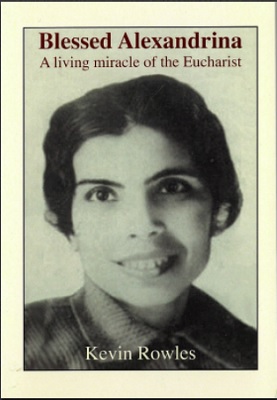 Blessed Alexandrina: A Living Miracle of the Eucharist (Booklet)

Blessed Alexandrina Maria da Costa of Portugal (1904-1955), one of the great mystics of modern times, was beatified by Pope John Paul II in 2002.

A 'victim soul' chosen by Christ to suffer in atonement for the sins of humanity, she was bedridden for life from the age of twenty while escaping from an attacker.

She mystically underwent the Passion of Christ on Fridays and her sufferings helped to shorten World War II. Her astounding life has many connections to the events of Fatima and she is known in Portugal as 'the fourth seer of Fatima.'

She urged all to "Do penance, sin no more, pray the Rosary and receive the Eucharist." For the last thirteen years of her life she lived on the Holy Eucharist alone, a medically confirmed fact.

She has been proposed by the Church as "a model of purity and perseverance in the faith for today's youth."

Every booklet purchased will include a free copy of the leaflet "15 Minutes," a leaflet for meditation based on the writings of Blessed Alexandrina! 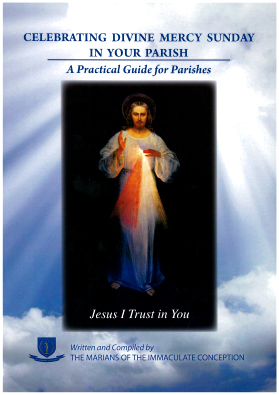 Produced by The Marians of the Immaculate Conception in Stockbridge, MA, USA.  This guide was prepared in response to the many requests we receive for guidance and clarification regarding Divine Mercy Sunday and the Divine Mercy message and devotion.

It contains 135 A4-size pages and includes detailed information about:

"This is by far the most precise and detailed book relating to preparing for Divine Mercy Sunday.  I highly recommend this book" - John Canavan, Director of Divine Mercy Publications Australia.