Born 25th August, 1905 in Poland, Helena Kowalska came from a large but poor peasant family of ten children. Called during a vision of the suffering Christ on 1st August, 1925, she entered the Congregation of the Sisters of Our Lady of Mercy and took the name Sr Maria Faustina where she lived for 13 years and worked humbly as a cook, gardener and doorkeeper. She made an ordinary life extraordinary, yet she was very natural, serene and full of kindness. 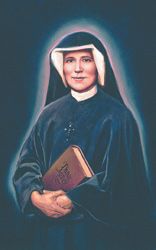 The years she spent in the convent were filled with extraordinary gifts, such as revelations, visions, hidden stigmata, participation in the Passion of the Lord, bilocation, the reading of human souls and prophecy.

Her living relationship with God, Our Lady, the angels, the saints and the souls in purgatory was as real for her as the world she perceived with the senses.

In 1935, Jesus said to Saint Faustina, "You will prepare the world for My final coming." (Diary 429) Jesus also said to her, "In the Old Covenant I sent prophets wielding thunderbolts to my people. Today I am sending you with my mercy to the people of the whole world." (Diary 1588)

Saint Faustina, consumed by tuberculosis and innumerable sufferings, which she accepted as a voluntary sacrifice for sinners, died in Craców at the age of 33 on 5th October, 1938. Pope John Paul II canonised her on 30th April, 2000 (Divine Mercy Sunday) as the first saint of the new millennium. Her feast day is 5th October.