News and Events
Opportunities to get involved 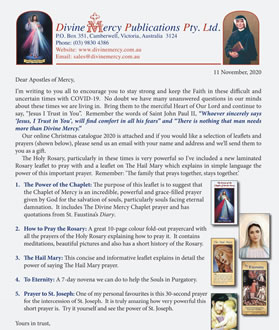 Browse some free gifts to help your prayer. 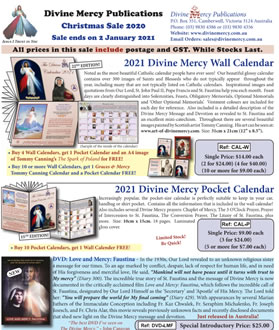 Browse our large range of religious items to choose a gift gives joy and inspiration.

Buy online or download our order form and send by snail mail. 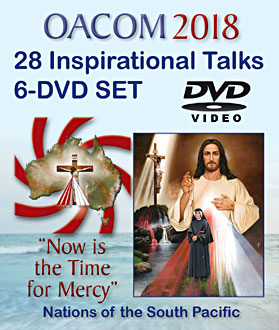 Filmed lived at the Apostolic Congress on Mercy at the Divine Mercy Shrine in Keysborough on August 24-26, 2018.

The 25th Anniversary Divine Mercy Fundraising Dinner was held on Saturday October 7th at Saints Peter and Paul Doncaster East Parish Hall. The evening was held as a first ever fundraiser for Divine Mercy and the it did not disappoint...

The Hall was filled to its 140 people capacity. John Canavan, Divine Mercy's Director for the last 25 years, was the Master of Ceremonies welcoming all those present. Alida and her daughter Lisa prepared a feast easily sufficient for 200 people. Alid's food was so good we ran out and needed to quickly make more for those no lucky enough to fill their plates the first time.

Simon Costa's presentation was a powerful display of how one man can make fundamental change that positively influences millions of lives simply applying previously existing techniques and disregarding the wise cracking bystanders. Simon ended up being one of the last people to leave, generously giving freely of his time and energy talking with both people he knew and mostly those he had never met before. The United Nations is certainly a fortunate organisation to have him working for them.

The night was finished up with John "Percy" Canavan joining us as the superstar auctioneer he is and sold off anything that wasn't nailed down to the highest bidder - whether they liked it or not (!)

Overall the Divine Mercy Fundraising Dinner was an astounding success. People attending were complimenting the food, entertainment, infotainment and good humour both on the night and for days afterwards. Since this dinner was held, the Divine Mercy Office has been fielding compliments in person, by phone and over email. To answer the most common query: yes we are having this event next year !

View photos from the event »